While hydroxychloroquine retinopathy is generally considered rare, a large study found that the overall prevalence of HCQ retinopathy was 7.5 percent in patients who used HCQ continuously for more than five years, increasing to around 20 percent after 20 years of therapy.1

We describe the main risk factors for HCQ retinopathy, detail the progression of the condition even after drug cessation and summarize the proposed mechanisms of toxicity in this condition.

To reduce the prevalence of HCQ, or Plaquenil, retinopathy, the current guidelines for HCQ prescriptions recommend ≤5 mg/kg real body weight. In usage, this translates to a minimum patient weight of 176 pounds to tolerate the typical daily dose of 400 mg. During the first five years of treatment at this recommended level, the risk for HCQ retinopathy development is less than 1 percent.2 At up to 10 years, the rate is less than 2 percent, but it rises to almost 20 percent after 20 years.2

Thus, this more conservative treatment protocol reduces the HCQ toxicity risk early (in the first 10 years), but it doesn’t reduce the risk if the patient has been on therapy for 20 years or more.

Screening for HCQ retinopathy should include multifocal electroretinography and fundus autofluorescence when therapy starts, then yearly after five years of treatment, along with annual spectral-domain optical coherence tomography and 10-2 visual fields after therapy starts (Table).

Here, we report on a case of Plaquenil retinopathy and review the literature.

We examined a 56-year-old patient who had used Plaquenil for 13 years and who was noted to have retinopathy. She described having a “sparkly C-shaped” image in her right eye for the previous two years before her first examination.

Almost all nine subfields of the macular thickness map for both eyes showed thinning (Figure 3A, page 37). Multifocal ERG  confirmed significant loss of foveal function with decreased central waveforms in each eye (Figure 3B).

We’ve found common symptoms among our HCQ retinopathy patients to be generally limited to the central visual field. They include:

Mihai Mititelu, MD, MPH, and colleagues studied qualitative vision changes in their HCQ patients.5 Five of their seven patients had complaints relating to night vision and blind spots, and declining visual acuity. Most of the symptoms developed after anatomic changes had occurred.

Hydroxychloroquine is an antimalarial drug often used to help treat rheumatoid arthritis, systemic lupus erythematosus and other autoimmune diseases. It has multiple pharmacological actions, one of which is to interfere with lysosomal function. Lysosomes engage in autophagy, which can lead to the presentation of autoantigens in dysfunctional tissues.

HCQ binds strongly to melanin in the RPE and uvea, and is therefore highly concentrated in these tissues—up to 10,000 times the plasma concentration after chronic use.9 A primary mechanism of action for HCQ is that it interferes with lysosomal function, specifically autophagy. It interferes with the ability of RPE cells to digest photoreceptor residue, leading to accumulation in lysosomes. Oxidation of the lysozymal product results in lipofuscin formation; its accumulation causes RPE dysfunction.10

While the lysosomal toxicity pathway is heavily studied, another proposed toxicity pathway involves the visual cycle. Researchers in Australia and China reported that human organic anion transporting polypeptide 1A2 (OATP1A2) is involved in the uptake of all-trans-retinol (at-ROL) in the RPE.11 RPE recycles the at-ROL and converts it back to 11-cis-retinal.

The same researchers also found HCQ to be an inhibitor of at-ROL uptake by OATP1A2.12 Excess at-ROL accumulation is then converted to lipofuscin. Progressive lipofuscin formation leads to continued lysosomal dysfunction and photoreceptor degeneration.13 The long half-life of HCQ (40 to 60 days) and high concentration in the RPE cells can result in progressive retinopathy long after drug cessation.8

Ruihui Zhang, PhD, and colleagues noted that in-vitro HCQ-exposed RPE cells had close to normal levels of healthy RPE cells when they were treated with salbutamol, an adrenergic beta-2-receptor agonist involved in the protein kinase A (PKA) signaling  pathway.

To test the involvement of the PKA pathway, they took these same cells (HCQ-exposed RPE cells + salbutamol) and introduced a PKA inhibitor. The viable RPE cells decreased to levels significantly close to that of RPE cells with HCQ toxicity.

This showed that the cyclic adenosine monophosphate (cAMP)-PKA pathway is involved in the protection of RPE cells.14 They also suggested that beta-2 adrenergic agonists, such as bronchodilators, could be studied to protect against or possibly treat HCQ retinopathy. RS 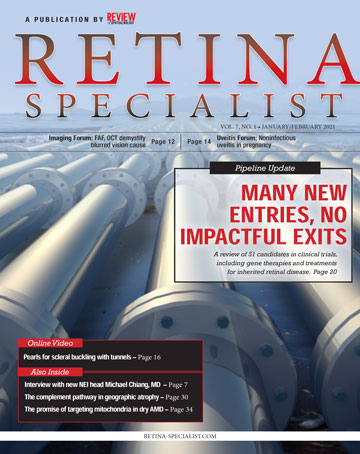 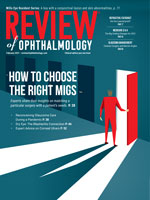