ARVO 2017 in Baltimore brought together the best researchers in retina to exhibit the latest in diagnostics treatment, and management strategies for retinal disease. These five posters and presentations from the Association of Research in Vision and Ophthalmology annual meeting caught our attention: the first use of robotic retinal surgery on a human eye; the effect of thefluocinolone acetonide (FAc) implant on diabetic retinopathy; topical latanoprost to slow myopia progression; detection of quiescent choroidal neovascularization (CNV) using optical coherence tomography angiography (OCT-A); and progress in stem cell therapy for geographic atrophy (GA).

This year, we present full citations in the references, including abstract numbers that you can use to locate the original report at arvo.org. We also note disclosures.

Is Robot Superior For ERM or ILM Peeling?
​
For years, many surgical disciplines  outside of ophthalmology have used robotic surgery to add precision to their operations. This study from the University of Oxford provided the first glimpse of the use of a robot for retinal surgery (Figure).1

The investigators randomized 12 eyes requiring epiretinal membrane or internal limitingmembrane peeling into two groups of six. One group received standard manual membrane peeling with a single surgeon, while the other underwent the procedure with an assistive teleoperative robotic system. In the robotic cases, the surgeon utilized a motion controller at the edge of the surgical field to initiate the flap for the membrane peel.

The primary comparative task was initiation of the flap for membrane peeling. In the robotic group, there were a total of two retinal hemorrhages and one incident of retinal touch with flap initiation, compared to five hemorrhages and two retinal touches in the manual group. The mean time to initiate the flap was on average 43 seconds long-er using the robot (213 ± 51 seconds vs. 130 ± 118 seconds).

This study demonstrated the first safe utilization of a robot for retinal surgery in human eyes. The robot eliminates instability from a surgeon’s microtremor and facilitates extremely precise surgical maneuvers. Given these advantages, robotic surgery may prove to be the superior option for future treatments requiring transretinal surgery with stem cells and gene therapy.

Four investigators disclosed relationships with Preceyes BV, the Eindhoven, Netherlands-based company commercializing the robotic surgery technology that has been developed at the Eindhoven University of Technology.

A post-hoc analysis of the FAME study demonstrated that intravitreal injectionof the FAc implant reduces the progression of diabetic retinopathy compared to sham treatment.2

Patients from the FAME trial who received 0.2 µg/day Iluvien were followed over 36 months and assessed for change in progression of proliferative diabetic retinopathy (PDR), mean Diabetic Retinopathy Severity Scale (DRSS) score and time to at least a two-step improvement or worsening in diabetic retinopathy (DR) grade compared with sham control-treated patients.

The overall benefits for diabetic retinopathy may support earlier use of Iluvien for younger pseudophakic diabetic patients to prevent progression of their retinopathy over time.

The study author disclosed a relationship with Alimera Sciences.

Current projections estimate that myopia will affect half of the world’s population by 2050, with expected rises in the rates of retinal detachments, myopic degeneration and other sight-threatening complications raising real concern. This study suggests that topical latanoprost may be an easily administered and effective topical therapy to halt the progression of myopia. Larger, controlled studies in humans will be important to validate this intriguing finding.

The authors had no pertinent disclosures.

OCT-A Detects Quiescent Neovascularization in AMD
​
Quiescent choroidal neovascularization (CNV) can be detected using OCT-A in nonexudative AMD.4 A multicenter, prospective consecutive case series analyzed swept-source OCT angiography (SS-OCT-A) of eyes with intermediate AMD (iAMD) or geographic atrophy (GA) secondary to nonexudative AMD in one eye and a history of exudative AMD in the fellow eye to determine the prevalence of quiescent CNV. The study also determined time to exudation and cumulative incidence of exudation in these quiescent neovascular membranes.

The researchers performed SS-OCT-A on 152 eyes (111 with iAMD and 41 with GA). Quiescent CNV was detected in 20 of the iAMD eyes (18 percent) and seven of the eyes with GA (17 percent). Eleven of 152 eyes developed exudation; 10 of those 11 eyes were previously diagnosed with quiescent CNV. The one eye developing exudation that was not diagnosed with a pre-existing neovascular lesion did not have adequate follow-up visits.

After 12 months, the cumulative incidence of exudation in all 152 eyes was 8.7 percent, and by 24 months it was 27.3 percent. In eyes with quiescent CNV, 29.7 percent of eyes developed exudation by 12 months.  There was no difference in the predicted cumulative onset of exudation from pre-existing CNV in eyes with either iAMD or GA (p=0.89, log-rank test).

This study demonstrates that nearly all eyes with iAMD or GA that develop exudation over two years have a detectable quiescent CNV on SS-OCT-A prior to the event.  These eyes may benefit from regular screening with SS-OCT-A for early detection of quiescent CNV. Further study is required to determine the possible benefits of treating quiescent CNV with anti-VEGF agents prior to exudation.

Subretinal Transplantation of Stem Cells for GA
​
Subretinal transplantation of human central nervous system stem cells (HuCNS-SC) appears to be associated with a slower expansion of GA in the quadrant in which the treatment was delivered.5 A multicenter prospective clinical trial examined 22 eyes in 11 subjects with bilateral GA from AMD (Table 2). The transplanted eye was considered to be the study eye, while the fellow untreated eye was treated as a control.

The investigators infused a total of 1 x 106 HuCNS-SC in a volume of 0.02 mLdirectly into the subretinal space superotemporal to the fovea near the junctional zone outside the area of GA. They measured total GA area using fundus autofluorescence images at baseline and month 12. They calculated sectoral/directional GA progression rates with respect to the foveal center in both eyes using special software­—a polar transformation method.

Twelve months after treatment, the researchers found no statistically significant difference in the mean change in total GA area between study and fellow eyes. However, the sectoral growth rate of GA in the superotemporal quadrant where the injections were placed was significantly slower in study eyes (0.06 ± 0.11 vs. 0.21 ± 0.13 mm2, p=0.03). The progression rate in the superotemporal quadrant was also significantly slower than the other three quadrants of the study eye combined (p=0.003).

The study authors concluded HuCNS-SC transplantation appears to be associated with slower growth of GA in the quadrant in which it is injected. Although further study is required, this is an exciting new development for the possible future treatment of GA, a disease for which we currently have no effective treatment.   RS 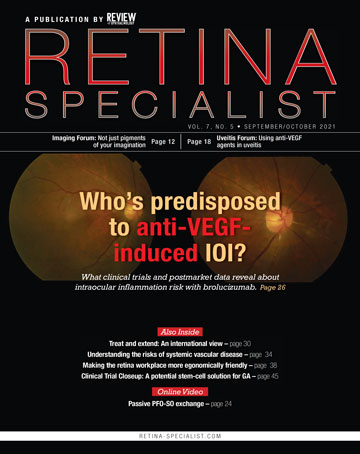