Ophthalmologists have widely embraced prophylactic intracameral vancomycin during routine cataract surgery to reduce the risk of postoperative endophthalmitis, with excellent results, but this practice has not been without controversy and debate. A large, retrospective study suggested that prophylactic intracameral vancomycin did not reduce the incidence of endophthalmitis.1 Other authors have suggested that routine prophylactic use may increase the risk of medication toxicity and drug contamination, and promote vancomycin resistance.1-4  The Centers for Disease Control & Prevention specifically recommended avoiding vancomycin for routine prophylactic use in surgery to prevent the spread of vancomycin resistance.4

More recently, a rare but devastating complication has been associated with prophylactic intraocular vancomycin use in cataract surgery, although the cause of the disease is not definitively known.5 My colleagues and I published a series of 11 eyes of six patients who all had a similar appearance of retinal vascular occlusion and hemorrhage with subsequent severe vision loss in many cases, which we termed hemorrhagic occlusive retinal vasculitis (HORV). The following is a case of a woman who experienced severe vision loss and neovascular glaucoma after cataract surgery, along with a review of the literature. A sidebar summarizes recommendations to avoid HORV (page 29).

Admission After Intracameral Vancomycin
In the summer of 2014, a 66-year-old woman had sequential and uneventful cataract surgery at an ambulatory surgery center, first in the right eye and one week later in the left. In addition to preservative-free lidocaine and viscoelastic, prophylactic intracameral vancomycin (1 mg/0.1 ml) was used during both surgeries. On postoperative day one, the uncorrected visual acuity was 20/25 in each eye and the patient was happy.

However, 10 days after surgery she first noticed blurred vision in the right eye. The cataract surgeon noted diffuse retinal hemorrhages in the right eye. She was referred to an outside retina specialist.
The retina specialist initiated oral valacyclovir 1,000 mg t.i.d. for presumed acute retinal necrosis. One week later, the patient noticed loss of vision in the left eye, as the right eye continued to deteriorate. Similar retinal findings were seen in the left eye, and the patient was referred to our service at the New England Eye Center of Tufts Medical Center.

On presentation to the clinic 18 days after the initial surgery, visual acuity was counting fingers in the right eye and 20/60 in the left. Mild cell and fibrin were noted in the anterior chamber with rare vitreous cell in both eyes. Intraocular pressure was 24 mmHg in both eyes.  Most strikingly, the retinal examination showed diffuse microvascular occlusion and extensive intraretinal hemorrhages in both eyes, worse in the right eye than the left (Figure 1).

Fluorescein angiography showed stark nonperfusion at the border of active vasculitis (Figure 2). The patient was admitted for further evaluation.

Inpatient Treatment
Inpatient treatment included intravitreal ganciclovir and foscarnet bilaterally, high-dose intravenous corticosteroids and oral valacyclovir for the possibility of acute retinal necrosis. Extensive ocular and systemic testing for hematologic, rheumatologic, infectious and neoplastic causes was negative. After 10 days, she was discharged on oral prednisone and valacyclovir, which we tapered over two months.
One month after stopping oral prednisone, hypersensitivity skin testing was negative for reactions to vancomycin, sodium hyaluronate  or lidocaine.

Three months after she first came to our clinic, the patient had developed neovascular glaucoma in the right eye. Despite intravitreal bevacizumab (Avastin, Genentech) injections, visual acuity in the right eye deteriorated to no light perception. She underwent a trans-scleral cyclophotocoagulation to control intraocular pressure. The left eye remained unchanged, with a resultant visual acuity of 20/200 at one-year follow-up. She received intravitreal ranibizumab (Lucentis, Genentech) and prophylactic panretinal photocoagulation in the left eye to prevent neovascular glaucoma.

Identifying Similar Cases
Around the same time as the patient described above was admitted, Laura Nicholson, MD, and colleagues at Massachusetts Eye and Ear Infirmary in Boston published a report demonstrating an identical disease in two other patients.6  After we discussed these cases with the authors of that report and other colleagues, a total of 11 eyes of six patients were collected with an identical appearance to our case, and the authors termed the condition HORV.

The etiology of HORV remains unknown, but it may be related to an immune reaction to intraocular vancomycin; that was the only agent common to all surgeries in this series.
Because the onset of disease was delayed, HORV does not appear to be related to the so-called “red man” syndrome, which is a mast cell-mediated skin reaction that occurs immediately upon injection of intravenous vancomycin and resolves immediately after discontinuation of medication infusion.7  The reaction in HORV rather appears more similar to rare reports of leukocytoclastic vasculitis and Henoch-Schönlein purpura secondary to vancomycin, both of which are mediated by antibody/antigen complex deposition causing small-vessel vasculitis occurring one to two weeks after initiation of intravenous vancomycin.8–10

Not Drug Toxicity
HORV likely does not represent a toxic reaction; onset was delayed up to 14 days after surgery, and some of the patients developed the same condition in the fellow eye even when the second cataract surgery was delayed by months or years. In addition, other eyes operated on the same day as those that developed HORV did not have any similar complications despite being operated on by the same cataract surgeon using the same technique, including intracameral vancomycin from the same batch.

If HORV is due to an immune reaction to vancomycin, it is likely extremely rare. In this series, all 11 eyes received intraocular vancomycin at the dose 1 mg/0.1 ml, which has been given intravitreally for many years for treatment of endophthalmitis without a known toxic reaction to the medication. In addition, since the European Society of Cataract and Refractive Surgeons report in 2007,11 tens of thousands of eyes have received intracameral vancomycin after cataract surgery, without emergence of an epidemic of HORV.  However, it is possible that there may be some cases of HORV that are less severe and have not been detected or reported. A recent case report demonstrated a milder case of HORV that spontaneously resolved without visual sequelae.12

A Poor Prognosis
The natural history of HORV can be visually devastating, because it carries is a high risk of neovascular glaucoma. In the cases we discuss here, final visual acuity was 20/100 or worse in eight of 11 eyes. Seven of 11 eyes developed neovascular glaucoma; four of these eyes had visual outcomes of NLP vision.  The outcomes of HORV are particularly disturbing in patients with poor visual outcomes in both eyes due to bilateral HORV.

All patients in this series received high-dose systemic and topical steroids, which may help slow the progression of the disease. Intravitreal anti-VEGF therapy and PRP seemed to delay or prevent the onset of neovascular glaucoma in the eyes with better outcomes. Of note, four eyes in this series received intravitreal vancomycin (and ceftazidime) for treatment of possible bacterial endophthalmitis; these eyes seemed to have particularly poor outcomes, suggesting that the immune reaction may have progressed further after introduction of a second dose of intraocular vancomycin. RS 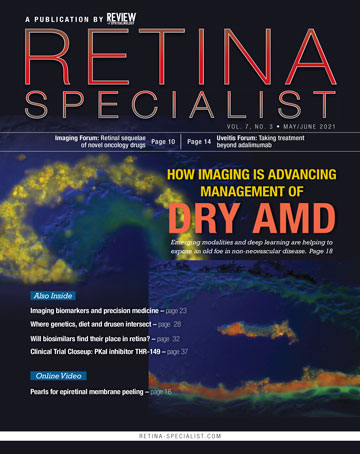 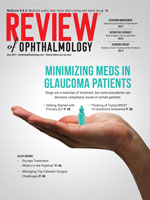