We have learned over the past decade that the risk of under-treatment of active neovascular age-related macular degenerationappears to be greater than the risk of over-treatment. Specifically, while multiple datasets have indicated that insufficient treatment of neovascular AMD leads to vision loss, the risk of anti-VEGF injections contributing to progressive loss of the retinal pigment epithelium (RPE) remains unclear.

Despite adequate wet AMD treatment that aims to achieve the clinical goals of maintaining a dry macula and avoiding recurrences, a significant proportion of patients note a slow, steady, and continuous decline in their visual function over time.

Not infrequently we find situations documenting a progressive loss of RPE that can clearly explain a patient’s difficulty reading (Figure 1). The situation becomes even more challenging if the patient requires frequent anti-VEGF treatments.

Anti-VEGF and RPE: No Consensus

Currently, no consensus exists on the potential effect of anti-VEGF therapy on the health of the RPE. Animal studies have indicated that anti-VEGF agents have a relevant effect on the choriocapillaris and its anatomic structure (e.g., loss of fenestration), and that drugs with higher affinity for vascular endothelial growth factor induce more such changes.1  Furthermore, if VEGF is neutralized experimentally, the RPE shows vacuoles and separation from the photoreceptor outer segments.2 These changes appear to be transient in cases where VEGF suppression is stopped.

Several clinical studies have found an effect of anti-VEGF inhibitors on the human choroid in different diseases, and it appears that a switch from ranibizumab (Lucentis, Roche/Genentech) to aflibercept (Eylea, Regeneron/Bayer) induceseven further reduction in choroidal thickness.3-5 However, it remains unclear if these changes are clinically relevant to the RPE and if a more profound reduction in choroidal thickness is related to acceleration in RPE loss. The CATT and IVAN studies indicated that patients continuously treated with either ranibizumab or bevacizumab (Avastin, Roche/Genentech) have a higher rate of new RPE loss.6 Unfortunately, so far in the VIEW studies, no rates of new RPE loss have been published on aflibercept. Besides the discussions regarding the most appropriate technology for evaluating the RPE, it remains questionable if these results are applicable in the clinic, where most physicians individualize treatment approaches instead of using fixed, frequent dosing.

In the first case, differentiating the cause of the RPE loss is almost impossible. It may be due to the neovascular disease itself, VEGF inhibition or “successful” CNV regression. But consider the most worrisome situation for many of us: an AMD patient who requires retreatment at least every six weeks (close to continuous treatment) is switched to aflibercept with the aim of a longer treatment interval.

We performed our own retrospective analysis of such a neovascular AMD patient population (n=96), requiring retreatment at least every six weeks with ranibizumab or bevacizumab. Similar to other reports, we found that the subsequent switch to aflibercept leads to a modest but significant reduction in central retinal thickness, some effect on pigment

epithelial detachments (PEDs) and an increase in the treatment interval (5.6 to 6.9 weeks), but no improvement in vision.7 This raises the question if we are providing any benefit to the patient by using a drug with experimentally more effect on the choroid but with limited data on the rate of new RPE loss, location of RPE loss and association with lesion type or specific characteristics such as choroidal thickness or intraretinal fluid.8

This worry was exacerbated in our patient population (n=84) showing an accelerated reduction in choroidal thickness by optical coherence tomography following the switch to aflibercept.5 We were fortunate to have a full spectral-domain OCT dataset (Heidelberg Spectralis) on all 96 patients, allowing us to evaluate for OCT-defined RPE loss. We defined RPE loss/macular RPE atrophy—with no consensus on OCT-defined RPE loss at hand—as an area with hypertransmission and overlying photoreceptor band loss of at least 300 μm in diameter.

In additionwe evaluated only for non-CNV-associated RPE loss to avoid the confounding aspects described previously, and used OCT to outline the RPE at different key time points (Figure 3). The example we present here may suggest an accelerated RPE loss with the switch in therapy to aflibercept.

To avoid the confounding factor that large areas of RPE loss grow faster than small areas, we followed the suggestion of Philip Rosenfeld, MD, and co-authors to use a square-root transformation to compensate for this effect.9 In our population of frequently treated patients (median of 20 intravitreal injections over 24 months prior to switch), we found 17 of 96 eyes with evidence of RPE loss of at least 300 μm in diameter one year prior to switch.

Based on the previous choroidal thickness analysis and selected cases (Figure 3), we expected an accelerated RPE loss with the switch to the VEGF inhibitor with higher affinity for VEGF. However, our study findings did not confirm our hypothesis.

Outlining the area of RPE loss after square-root transformation of up to four years on aflibercept treatment and a comparable group on ranibizumab shows quite constant growth rates on the area of RPE loss (Figure 4). We actually found strong indicators for the linearity of the progression of RPE loss in both patient groups (mean R2 of 0.959).

Of course, we selected this patient population for non-CNV-related RPE loss, not for overall RPE loss. However, the patients did receive an adequate number of anti-VEGF injections associated with substantial VEGF suppression. So, it is reassuring that this presumably at-risk population did not show an accelerated RPE loss after the switch and over long-term follow-up.

On the other hand, this population may actually not be the one at risk for accelerated RPE loss, since the high need for anti-VEGF inhibition could indicate that the RPE produces adequate amounts of VEGF to protect the eye from the potentially adverse effects of VEGF suppression.

We alsoneed to realize that these patients—unlike those receiving monthly treatment in the continuous treatment arms in CATT and IVAN—did not have constant VEGF suppression but were on a treat-and-extend strategy where complete and constant VEGF suppression is unlikely. Unfortunately, were not able to evaluate the rate of RPE loss prior to the appearance of neovascular AMD. That might be a most interesting study: monitoring fellow eyes with non-neovascular AMD that eventually develop neovascular AMD and require anti-VEGF treatment.

Our findings may help in decision-making regarding individual treatment strategies for patients with neovascular AMD that require frequent reinjections in order to maintain a dry retina. It appears that in this patient population, frequent and long-term anti-VEGF injections with ranibizumab or a switch to aflibercept do not accelerate the persistent rate of RPE loss most likely due to the underlying disease. Therefore, the highest risk for vision loss in this specific population remains under-treatment with anti-VEGF therapies.

For patients with neovascular age-related macular degeneration that require frequent reinjections, under-treatment with anti-VEGF agents poses the highest risk for vision loss. No consensus exists on the potential effect of anti-VEGF drugs on the retinal pigment epithelium, although animal studies have indicated they affect the choriocapillaris and its anatomic structures, and that drugs with a higher affinity for VEGF induce more such changes. This article reports on a retrospective analysis that indicates frequent and long-term anti-VEGF injections with ranibizumab or a switch to aflibercept in this patient population do not accelerate the rate of RPE loss, and confirms previous reports that a switch to aflibercept may lead to a modest but significant reduction in central retinal thickness and have some effect on pigment epithelial detachments, but causes no improvement in vision.  RS 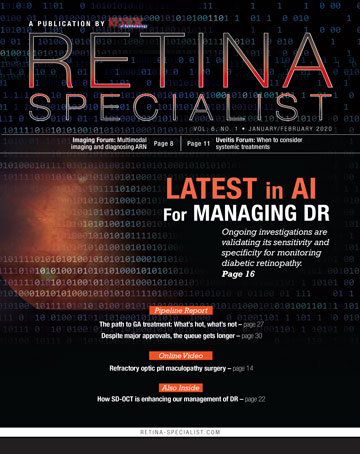 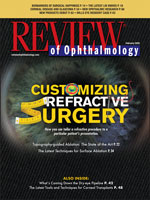