Anti-VEGF drugs have proven to be effective treatments for diabetic macular edema, but about half of this population does not respond to anti-VEGF therapy and monthly injections can be burdensome. A readout from the DEL MAR Phase IIB Stage 2 clinical trial of the integrin peptide agent Luminate (Allegro Ophthalmics) as sequential therapy with anti-VEGF shows the potential of extending out those injections.

Luminate showed noninferiority to bevacizumab (Avastin, Roche/Genentech) in average change in best-corrected visual acuity at 20 weeks when Luminate was used in sequential therapy with a single bevacizumab
pretreatment.

Luminate is a first-in-class agent that targets integrin receptors involved in cell signaling and regulation and in the construction of new and aberrant blood vessels. It not only blocks production of growth factors, but also directly interferes with vessel construction and has specific anti-inflammatory properties.

The mechanism of action in Dr. Kunimoto’s own words:
The mechanism of action is that Luminate, which binds to several specific integrin receptors, resets the cell cycle into homeostasis and normal function so that the cells are not producing vascular endothelial growth factor (VEGF) and other inflammatory mediators in their hypoxic state.

Work by Julie Kornfield, PhD, at the California Institute of Technology, and by Peter Compochiaro, MD, at Johns Hopkins University, supports the hypothesis that Luminate-treated cells did not express anti-inflammatory mediators.

What is the advantage of sequential therapy of bevacizumab followed by Luminate?
At month five, 88 percent of the sequential-treatment group had vision improvement, and at every single time point Luminate showed equivalency to bevacizumab in vision improvement through the entire five-month study. When the cells return to their normal homeostatic state, the anti-VEGF clears the VEGF burden while Luminate blocks inflammation and further production of VEGF.

What are the take-home points of the trial?
First, the trial met its primary endpoint of noninferiority to bevacizumab in improvement of BCVA when Luminate was used in sequential therapy. Secondly, the 1-mg dose of Luminate in sequential therapy demonstrated improvement in BCVA at all time points when compared to bevacizumab monotherapy. Third, Luminate showed 12 weeks of durability. And lastly, 60 percent of the patients in the DEL MAR Stage 2 population were chronically treated with anti-VEGF and even they saw substantial improvement in BCVA.

What’s next?
Allegro is conducting a subgroup analysis of the DEL MAR data and is planning the design of Phase III trials in anticipation of a meeting with the Food and Drug Administration in January 2018, Dr. Karageozian says.

“Concurrently, we’re scaling up manufacturing and personnel in preparation for Phase III, and will continue to meet with potential strategic partners and explore other fundraising options to raise the capital needed for Phase III trials,” he says. Expect to see the Phase III trials roll out in the first half of next year.  RS 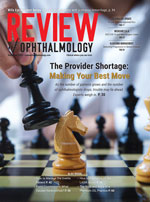