The overall results of Diabetic Retinopathy Clinical Research Network Protocol U,1 a short-term study comparing the additive benefits of a dexamethasone implant (Ozurdex, Allergan) to ranibizumab

(Lucentis, Roche/Genentech) in patients with persistent macular edema and visual loss, showed no visual benefit from the combination treatment.

The primary endpoint was the visual acuity gain after 24 weeks on combination or ranibizumab-alone treatment. Overall, the additional visual acuity gain was 3 letters in each group. Prior to this, subjects had already gained 3 letters when treated with ranibizumab Q4 weeks under the study protocol. Thus, there was no overall difference in acuity between the groups.

Here, I review the key findings of Protocol U and how they can enlighten our clinical approach to using the dexamethasone implant in our retina practices.

Where did Protocol U show visual benefit?

On preplanned secondary analysis, we found a greater proportion of subjects with a 15-letter or greater improvement in vision in the combination group vs. the ranibizumab-only group (11 vs. 2 percent, p=0.03). We also found that the combination group had a small increase in the proportion of patients with decreased vision over 10 letters (13 vs. 6 percent, p=0.09), but this was not statistically significant.

Where did Protocol U show anatomic benefit?

We found that central subfield thickness reduced significantly more in the combination group than in the ranibizumab-only group (110 µm vs. 62 µm, p<0.001). Additionally, about 50 percent of the combination group had a flat retina at week 24 compared with 31 percent of the ranibizumab-only group (p=0.02). The improvement in OCT thickness was rapid and sustained in the combination group. This would be expected because Ozurdex was provided every 12 weeks, not every 24 weeks per the label indication. The investigators believe its duration of action is far shorter than what the label stipulates.

What about pseudophakic patients?

At the end of the study, the 24th week after randomization, the pseudophakic group had a 5-letter gain in acuity while the phakic group had a 2-letter gain, but this difference at this one time point did not reach significance. The study was not sufficiently powered to determine if pseudophakic patients would benefit from treatment early in the disease process. We just didn’t have sufficient numbers for this analysis.

What about intraocular pressure?

The entry criteria for the study were rather strict with regards to potential subjects not having any history of steroid responsiveness. For example, the study excluded subjects with any history of intraocular pressure risk with topical steroids in the fellow eye. Despite this careful exclusion, about 30 percent of the combination group had a significant rise in IOP, with 20 percent requiring treatment. It’s possible that this pressure rise was more common than in the MEAD studies because the frequency of Ozurdex injection was higher (12- vs. 24-week interval).2

The previous DRCR.net Protocol I study demonstrated that approximately 40 percent of patients treated with ranibizumab continued to have macular edema after six months of treatment.3 Of these, only 32 percent had visual acuity loss with macular edema. Protocol T, which compared aflibercept (Eylea, Regeneron), bevacizumab (Avastin, Roche/Genentech) and ranibizumab, showed that 16, 40 and 27 percent of subjects, respectively, had persistent edema with vision loss of at least 20/32 after six monthly injections.4 These might be the patients most likely to benefit from alternative treatment options, including steroids and laser.

Ozurdex in my practice

In my clinical practice, I use intraocular steroids, mostly Ozurdex, in select cases. I’m most likely to use this drug in patients who have persistent mild edema despite anti-VEGF and are scheduled for cataract surgery relatively soon. Pretreatment with Ozurdex seems to prevent worsening the macular edema that often occurs in this subgroup of patients. Otherwise, I believe there’s a very limited role for steroids in phakic patients.

There may be a benefit to having a retina without edema rather than a retina that continues to have edema, even if measured Early Treatment Diabetic Retinopathy Study visual acuity is the same. The DRCR.net studies show that a patient can have stable and even improving vision in the presence of edema for at least two years. However, the patient may be missing some visual function, even if it’s not measurable with high-contrast letters. For example, a patient’s low-contrast acuity, which may reflect real-world night vision, may be limited in the presence of increased edema. We just don’t know, because few studies have looked at such variables closely.

Despite the potential benefit of steroids for reducing edema—about 50 percent more than anti-VEGF alone—their side- effect profile makes them a less-
desirable choice. In phakic patients, the risk of cataracts is sufficiently high that I wouldn’t use steroids.

However, pseudophakic patients, especially those who are not steroid-responsive, may benefit from having a flat retina with the same ETDRS measured acuity vs. treatment with anti-VEGF alone. Other studies have shown comparable benefit when using steroids with anti-VEGF vs. steroids alone. This may also limit treatment and cost burden.

However, before choosing this approach, it’s best to confirm the
underlying diabetic retinopathy is well-controlled because I believe steroids don’t regress diabetic retinopathy as well as anti-VEGF agents. Also, while Ozurdex may require treatment only every 12 weeks, many patients will require IOP monitoring every four to eight weeks.

Definite anatomic benefits exist when adding Ozurdex to ranibizu-
mab in DME, as studied in Protocol U. However, the benefits of steroids are limited by their side-effect profile. In Protocol U, overall acuity was similar in both study groups, confirming the limits of steroid use. RS 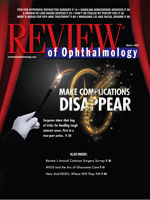