A 37-year-old Hispanic woman came to the Los Angeles County Hospital/University of Southern California emergency department complaining of a painful, burning sensation and redness in her right eye with blurry vision. The symptoms began two weeks earlier and worsened until she developed a pressure-like headache.

She complained of sensitivity to light and was experiencing night sweats, fevers and cough. She denied recent weight loss, changes in bowel habits, chest pain, difficulty breathing, rashes or changes in sensorium. She said that she had normal vision in both eyes since childhood until three years earlier, when she had a similar episode of painful vision loss in her left eye. She vaguely recalled using an eye drop at the time and had eventual resolution of the irritation and pain, but resultant poor vision in that eye.

In addition to the right eye pain, the patient reported pain along her entire left leg and lower back for about one year. She reported a history of hypothyroidism, dyslipidemia and depression, and also noted particularly heavy menstrual periods. She had no systemic or current ophthalmic medication use. Her family history was negative. She denied tobacco, alcohol or illicit drug use. She was allergic to ibuprofen.

The patient was slightly overweight and in no apparent distress. BCVA was 20/200+1 OD and 20/200+1 OS. Intraocular pressure was within normal limits OU. Pupils were 4 mm OD and 2.5 mm OS, and the amount of anisocoria was equal in both light and dark. She had a sluggishly reactive pupil and a relative afferent pupillary defect (APD) OD, and a normally round and reactive pupil OS. Brightness sense OD was 40 percent of OS, and she reported red desaturation OD. She could not see the Ishihara color plate OD, but she correctly identified six of eight plates OS. She had no pain with eye movement.

The slit lamp examination OD was significant for diffuse conjunctival injection accompanied by diffuse, fine keratic precipitates and 3+ anterior chamber cell. The iris had developed a fibrinous strand along the pupillary margin, but the lens was clear. The anterior segment OS was unremarkable without evidence of prior inflammation.

A dilated exam OD revealed a hazy view secondary to heavy vitreous cell, sometimes in clumps, but the optic nerve appeared pink, sharp and well-perfused. The macula appeared grossly flat, the vessels appeared perfused, but we could not adequately visualize the periphery. The left eye had no vitreous cell, a normally demarcated optic nerve head with a fibrous tuft extending into the vitreous and a full-thickness macular hole that appeared chronic. The vessels OS were mildly attenuated, and far in the periphery contiguous bands of retinal fibrosis were visible (Figure 1).

This panuveitis involved a broad differential diagnosis and collection of autoimmune and infectious serologies (Box, page 17). B-scan ultrasonography of the right eye demonstrated vitreous opacities and a flat retinal profile in all quadrants. Fluorescein angiogram, while of poor quality in the right eye due to media opacity, showed peripheral staining without progressive leakage from the inferotemporal venous arcade,

diminished far temporal and nasal capillary perfusion and progressive staining of fibrotic ridgeline temporally in the left eye. Optical coherence tomography (OCT) could not capture images in the affected eye due to the media opacity, but confirmed a stage 4 full-thickness macular hole with an epiretinal membrane in the left eye (Figure 2).

We started her on topical prednisolone q1h and atropine BID to prevent synechia and treat photophobia. She agreed to return the following morning, but instead returned two days later.

At the second visit, her vision remained stable, but the anterior cell had decreased to 1+ with persistent, diffuse fine keratic precipitates. The dilated exam was clear enough to reveal small peripheral white patches in the inferior and temporal peripheries, suggestive of toxoplasmosis or sarcoidosis as a possible granulomatous etiology for her panuveitis. The previously collected complete blood count with differential was normal except for a mild microcytic anemia (later worked up and thought to be due to menorrhagia). Tuberculin PPD, serum RPR and treponemal antibodies were negative, and a chest X-ray normal.

After we discussed the possible viral etiology and the risks of treatment with steroid therapy only, we prescribed acyclovir 800 mg PO five times daily, started oral prednisone (1 mg/kg) daily after 24 hours, and followed closely while awaiting the remaining lab results. On follow-up three days later, the ANA (1:80 speckled) and HSV-2 IgG were significantly elevated while all other serologies, including Lyme, VZV IgM, HSV IgM and HSV-1 IgG, were normal.
We ordered VZV serologies, but the results were delayed. Our suspicion of a herpetic etiology based on the lab results was growing. The improved fundus view demonstrated more obvious retinal whitening and a history of a likely similar but resolved event in the fellow eye that resulted in the permanently decreased vision. We admitted her for intravenous acyclovir and continued oral prednisone 40 mg daily. We also administered an intravitreal injection of foscarnet.

Polymerase chain reaction (PCR) of an anterior chamber paracentesis performed on the day of admission was positive for herpes simplex virus-2 (HSV-2). We diagnosed panuveitis secondary to HSV-2 in the right eye and a compatible history in the left eye resulting in the chronic macular hole secondary to vitreous degeneration.

The patient was kept in the hospital for one week of IV acyclovir and received an additional foscarnet injection on day 12. Follow-up included regular 50° and widefield fundus photography as well as OCT imaging (Figure 2) for monitoring. She continues follow-up so we can monitor her for development of retinal necrosis and retinal detachment.

Panuveitis has many potential etiologies. In the absence of medical risk factors for immune system compromise, one must maintain a broad differential throughout the workup.

Viral panuveitis and associated retinitis can be devastating, especially when left untreated. This presentation is unique given the patient’s history of a similar episode in the fellow eye that resolved without interventions but resulted in a macular hole and peripheral retinal fibrosis.

Because our patient presented about  two weeks after the onset of symptoms, she had developed an impressive granulomatous panuveitis. Here, we prefer to describe this as a viral panuveitis rather than acute retinal necrosis (ARN).

However, these entities likely exist on a spectrum.

Our patient demonstrated several discrete foci of retinal whitening with likely prior circumferential spread that we could not fully appreciate because of significant inflammation in the anterior chamber and vitreous. Once the vitritis cleared, arteriolar sheathing was obvious.

This patient also demonstrated other findings characteristic of ARN: an APD, reduced brightness sense and red desaturation. Although she had symptoms for two weeks before her visit, she had no rapid progression of any retinochoroidopathy, possibly thanks to the initiation of therapy.

PCR evaluation of intraocular fluids for HSV, VZV and CMV enhanced our ability to diagnose viral panuveitis  and, indeed, ARN, although the lack of inflammation may also have helped differentiate the latter. Historically, ARN has been associated with VZV infections. However, HSV-2 occurs with a higher incidence in younger patients like ours, while VZV is more prominent in older patients.2

When clinical suspicion is high and a viral etiology has been confirmed, expeditious, targeted treatment consisting of systemic and, usually, intravitreal antivirals should occur. Systemic steroids may follow soon afterward. The treatment strategy of HSV-2 panuveitis has been adopted from ARN.

Anti-herpetic drugs include older agents like acyclovir and newer drugs like valacyclovir. Oral acyclovir has lower systemic bioavailability than valacyclovir, so dosing of acyclovir for ARN is frequently five-10 days IV before transitioning  to oral therapy five times daily for up to three months, a practice established well before high-bioavailability oral agents like valacyclovir were available.3 Combined intravitreal and systemic antiviral therapy has been associated with better visual outcomes than systemic therapy alone.4,5 Even after a patient starts antiviral therapy, continued close follow-up is important because multidrug resistance has been known to exist among herpes viruses.6

Effective management of panuveitis requires prompt and accurate identification of the etiology, because the wrong treatment can allow the disease to progress. The differential diagnosis must be broad and include infectious and autoimmune etiologies, especially in immunocompetent patients. Intraocular fluid analysis greatly facilitates diagnosis but may require some time to yield definitive results. In the early phases of evaluation, the clinical context and examination, with particular attention to immune status and risk factors, should guide management.  RS 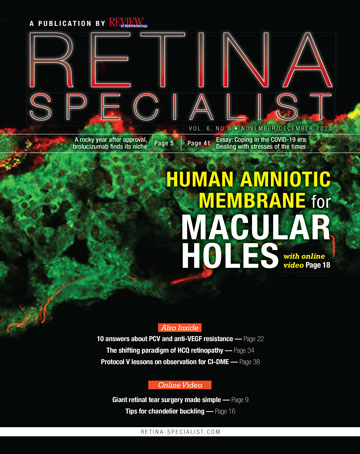