Laser therapy was a major breakthrough in diabetic retinopathy treatment, with its efficacy validated by a number of clinical studies in the last three decades of the 20th century. However, it relied on fundus photography and fluorescein angiography to diagnose clinically significant macular edema. Since then, optical coherence tomography has revolutionized the clinical management of diabetic macular edema because of its widespread availability, ease of use, and ability to quantify DME noninvasively. This tool has become even more powerful coupled with the emergence of pharmacotherapies to treat the disease.

Here, we review how OCT has changed the way retina specialists manage DR and explore the latest research into spectral-domain OCT and OCT angiography.

Prevention of DR with tight control of blood glucose levels and hypertension would be ideal, but progression of the disease to DME typically warrants medical or procedural intervention. Until the development of pharmacotherapy, laser therapy remained the standard of care for both DME and proliferative diabetic retinopathy. Its clinical efficacy as a tool to treat DR was first established in 1971 with the multicenter, randomized Diabetic Retinopathy Study (DRS), which showed that laser panretinal photocoagulation (PRP) significantly decreased the risk of severe vision loss in patients with PDR.1

The Early Treatment Diabetic Retinopathy Study (ETDRS) was designed to evaluate argon laser photocoagulation in the management of patients with non-proliferative DR and early PDR, as well as DME. In 1985, the first report from the ETDRS recommended macular laser to treat clinically significant macular edema (CSME).2

The ETDRS defined CSME as retinal thickening or hard exudates associated with adjacent retinal thickening involving the center 500 μm of the macula or threatening to involve it. This clinical definition set the standard for assessing DME for many years. Importantly, at the time of these studies, the diagnosis of CSME was subjectively based on stereo fundus photography and fluorescein angiography.

The advent of OCT changed the course of DR management. OCT uses the reflectivity of ocular structures to portray in vivo cross-sectional images of the retina. It does so using interferometry to measure the interference pattern between the light backscattered from the sample (e.g., the retina) and a reference.3

Before OCT’s clinical debut in the mid- 1990s, the en face, two-dimensional nature of imaging made the quantification of macular thickness difficult. Even the standard of care, stereoscopic imaging, did not sufficiently detect subtle macular edema. The novelty of OCT lay in its ability to generate cross-sectional images of the retina that paralleled histology, such that the retinal layers and pathologic features could be assessed and measured in vivo.3,4

Burgeoning clinical data on OCT in the late 1990s and into the 2000s produced novel insights into the characterization of DME. A variety of DME classification schemes were developed to account for newly visualized morphological changes, including patterns of fluid accumulation (Figure 1) and the presence of vitreomacular traction.5,6 Critically, OCT could also quantify the degree and location of macular thickness. OCT was consequently found to be more objective and accurate for the evaluation of macular thickness than the standard assessment imaging outlined by the ETDRS.7-9

Serendipitously, the maturation of standard OCT assessment coincided with the arrival of pharmacological agents such as anti-VEGF drugs and corticosteroids, and the need to assess their efficacy for treating DME. Large multicenter clinical trials, from industry-sponsored trials such as RISE and RIDE to the Diabetic Retinopathy Clinical Research Network (DRCR.net) collaboration, adopted OCT as an objective tool to measure retinal thickness in their patients.10,11

Specifically, OCT was used in early clinical trials to subdivide CSME based on the presence or absence of central macular involvement with a central subfield thickness (CST) of ≥250 to 275 μm as enrollment criteria.11,12 CST is a mean of thickness values obtained in the circular 1-mm diameter area centered at the fovea, which was found to be highly reproducible and therefore valued as a standard OCT measure across studies.13,14

OCT for measuring central thickness led to the bisection of the term CSME into definitions now commonly used today: center-involving and non-center-involving edema. This distinction was made because foveal center involvement is associated with a higher risk of vision loss and greater need for treatment. However, while it’s clinically useful to measure central macular thickness to follow and manage DME, a change in CST does not by itself correlate with visual acuity, so it can’t be used to predict outcomes.15

The original OCT technology was based on time-domain detection and was used in clinical trials on DME management until 2011. The majority of commercial OCT devices today are spectral-domain systems, which refers to the way the device receives and processes the returning light signal. This technology entered the market in 2006 and enabled imaging speeds 25 to 100 times faster than time-domain instruments, which led to improved image quality, the ability to register images from visit to visit, and a reduction in skip areas when doing macular mapping.16,17

The enhanced sensitivity of SD-OCT imaging made it possible to visualize the boundaries between retinal layers more accurately, with novel clarity of the outer retinal layers where the photoreceptors reside. Several studies found a correlation between disruption of two outer retinal layers—the external limiting membrane and ellipsoid zone—and visual acuity, showing that photoreceptor integrity prior to treatment can predict visual recovery in DME.18,19 Recent work has shown that ischemia of the inner retina leading to disorganization of the inner layers retinal also correlates with visual acuity outcomes in DME.20

After initial treatment, qualitative evaluation and thickness measurements between baseline and follow-up OCT scans allow us to follow progress and determine management. For example, the degree of change in macular thickness measured on OCT can help us decide whether to repeat anti-VEGF injections or change therapeutic agents. OCT can also identify areas of vitreomacular traction that need  treatment with vitrectomy surgery. Other indications for OCT in managing DR include evaluating unexplained visual acuity loss and detecting other forms of macular disease. (OCT is currently not indicated for screening of patients with diabetes having no or minimal retinopathy beyond obtaining a baseline image.10)

Because DR is inherently a disease of blood vessels, imaging the microvasculature affected by DR has always been of great interest to clinicians and researchers. FA has been used in DR assessment for decades to help identify retinal neovascularization, retinal vascular incompetence, particularly leaking microaneurysms (MA); and areas of ischemia. However, as focal laser surgery has decreased with the advent of anti-VEGF therapy, the need to localize such findings has also decreased, and thus, so has the utility of FA.

OCT angiography technology has emerged to visualize the retinal and
choroidal vasculature in precise detail. The approach generates a volumetric image of the blood vessels by using motion contrast between erythrocytes in sequential scans relative to the rest of the static retina, negating the need for invasive dye. The high speed of SD-OCT compared to TD-OCT made it possible to image the retinal layers and vasculature all at once when the angiography algorithm was developed.

Unlike two-dimensional FA images, OCTA can delineate the different layers of retinal vasculature, which  has allowed for novel insights into the characteristics of vascular change in DR. OCTA can depict many, but not all, of the MAs visible on FA, and it doesn’t visualize leakage because it doesn’t utilize dye.21

However, OCTA is clinically useful for identifying and quantifying features of macular ischemic change such as areas of capillary loss or dropout, retinal nonperfusion and enlargement of the foveal avascular zone.22 Recent work has even been able to detect and quantify vascular changes in patients with diabetes before classic signs of DR are clinically visible.23,24

Current research is investigating ways to harness these OCTA measurements to predict the development and progression of retinopathy so that treatment choices can become more efficient and effective. One of the major limitations of most current commercial OCTA technology is that imaging is restricted to between a 3 x 3- and 12 x 12-mm view of the central macula, although significant ischemic burden is concentrated in the periphery.

However, innovations in OCTA are
allowing for deeper and wider imaging capabilities. Although the features described here are still investigational, this research suggests that measuring vascular features using OCTA may one day be a powerful tool for screening diabetes patients and directing management. RS 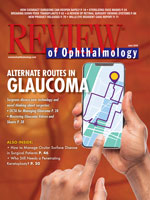