A 70-year-old woman with a history of non-exudative age-related macular degeneration and on AREDS 2 supplementation presented to the retina service at the University of Washington for a routine follow-up. She reported that her vision had worsened in the right eye, while the left eye was stable.

She denied any floaters or flashes, or metamorphopsia. Her medical history was notable only for hypertension, well controlled on a single agent, and chronic back pain for which she had recently started taking gabapentin.

Best-corrected visual acuity in the right eye was 20/50, decreased from 20/30 six months earlier. Her left-eye BCVA was unchanged at 20/20. Intraocular pressures were within normal limits in both eyes. Pupils were round and equally reactive to light, and there was no afferent pupillary defect. Confrontational visual fields were full in both eyes. The anterior segment examination was notable only for stable bilateral moderate nuclear sclerosis.

The dilated fundus examination revealed confluent soft drusen and pigmentary changes in both maculae, and peripheral reticular changes in both eyes. These findings were grossly stable from her previous visit.

However, in the left eye we noted a new focal dilation of a first-order retinal arteriole at its site of division into a second-order arteriole, along with overlying focal retinal nerve fiber layer edema (Figure 1A).

Optical coherence tomography and fluorescein angiography transiting the right eye were performed to evaluate both the decreased vision in the right eye as well as the vascular abnormality in the left eye. OCT demonstrated new subfoveal hyperreflective material and a small intraretinal cyst in the right eye.


FA demonstrated a small area of later leakage at the fovea, which, together with the OCT findings and objective decrease in BCVA, was consistent with new choroidal neovascular membrane (CNVM) and conversion to exudative AMD.

In the left eye, OCT showed increased peripapillary RNFL hyperreflectivity and thickness (Figure 2A), and FA demonstrated early brisk arterial leakage in the area of the incidentally noted arteriole dilation (Figure 1B).

For the conversion to exudative AMD in the right eye, we performed an intravitreal injection of bevacizumab. The incidental vascular findings in her otherwise asymptomatic left eye were concerning for fusiform retinal arterial microaneurysm (RAMA).

Our patient’s risk factors for this condition included her age and history of hypertension, albeit well-controlled per the patient. Upon further inquiry into her recent medical history, she informed us that over the preceding month she had started to use an inversion table for five minutes every day at the recommendation of her physical therapist as a homeopathic remedy for back pain.

We hypothesized that the inversion table therapy could have episodically increased the patient’s intracranial and/or blood pressure with transmittal to her retinal vasculature, and thus could be related to the formation of the new RAMA. Therefore, we advised her to stop using the inversion table and to consult with her primary-care provider to ensure optimal blood pressure control.

The patient stopped using the inversion table as instructed. At her subsequent visit one month later, the RAMA lesion appeared consolidated and calcified (Figure 1C), and the surrounding RNFL edema had entirely resolved on OCT (Figure 2B). At six-month follow-up, her vision, exam and OCT remained unchanged.

As with our patient, RAMA is often found incidentally on routine examination, and patients are usually asymptomatic.4 However, symptoms can dramatically manifest as sequelae of aneurysm rupture.

RAMA is highly associated with systemic hypertension and hyperlipidemia. It has been postulated that atherosclerosis and high blood pressure weaken the retinal arteriole wall, and continued hydrostatic pressure from uncontrolled hypertension leads to the formation of an aneurysm.1,6

As for inversion therapy

The inversion table is a modern spin on a method of antiquity to alleviate lower back pain. Hippocrates, the father of medicine, was thought to have introduced this therapy in 400 BC (Figure 3). He tied patients to a ladder in an upside down position in order to treat multiple spinal diseases, including scoliosis, kyphosis, tuberculous spondylitis and dislocations of the vertebrae.7

In the 1980s, Robert Martin, MD, published the book The Gravity Guiding System and advocated for the use of gravity and the inversion table to eliminate back pain (Figure 4). This system theoretically works by relieving pressure on the spine, joints and muscles. With support from the physical therapy community, the public has embraced the inversion table with marked enthusiasm.

Nevertheless, significantly higher systolic and diastolic blood pressure has been reported in patients who did inversion for two minutes.8 In 2019, researchers used ultrasonography to demonstrate the significant increase in intracranial pressure (ICP) at three minutes of inversion.9

A separate study reported that ICP didn’t return to baseline for several minutes after the study subjects resumed normal positioning. Similarly, both systolic and diastolic central retinal artery pressures of young healthy adults were shown to be significantly elevated on inversion in a study in 1983.10

A question worth asking

While hypertension and elevated ICP may cause serious end-organ damage such as congestive heart failure, myocardial infarction, ischemic or hemorrhagic stroke, increased retinal vessel pressure could lead to hemorrhage, and retinal artery or vein occlusion. Therefore, several authors have advised against the use of the inversion table, especially in older patients with hypertension or a history of stroke or elevated ICP.

Ours is a case of fusiform RAMA as a manifestation of end-organ damage attributed to increased blood pressure or ICP in the setting of inversion table therapy. While our patient maintained good vision and had spontaneous involution of her aneurysm with cessation of inversion table use, the rapid development of the lesion since her normal exam six months earlier gave us cause for concern for potential worsening and rupture had she continued regular inversion.

RAMA is an acquired dilation of a retinal artery associated with hypertension and atherosclerosis. Most cases are asymptomatic and resolve spontaneously without long-term sequalae, but uncontrolled blood pressure could result in rupture and multi-layered hemorrhage.

While use of an inversion table may relieve lower back pain by taking advantage of gravity, this therapy could elevate blood pressure or ICP, resulting in serious systemic and ocular side effects, including RAMA. Older patients with cardiovascular risk factors and their providers should consider all risks and benefits when contemplating this option for the treatment of back pain. RS 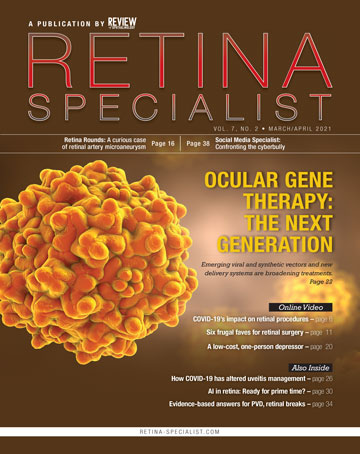 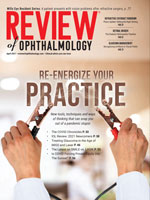